Influence of alcohol on motor control

Influence of Alcohol on Motor Control

This study was investigating the influence of alcohol intoxication on performance in visuomotor tasks. The second task determined the influence of alcohol control on motor control by drawing three shapes. In the first experiment students were administered with an alcohol content of 0.80 BAC while in another experiment students were sober. In both experiments, students were using their dominant hand to draw the three shapes. Students tried to copy the exact size and shapes of the models, which were a triangle, pentagon, and hexagon. Having carried out the first experiment, student was drawing the shapes being completely sober. While the other student tried to copy the three shapes being drunk. Each shape was drawn 3 times and was timed on how long it took to finish it. Later the results were compared to see whether alcohol had any effect on the shape each student had drown, and the time it took to draw the shapes. During the experiment, behaviors observed among the students were directly tied to the effect of alcohol on the brain.

It was observed that, students who had been administered with an alcohol level of 0.80 BAC experienced some difficulties while drawing the three shapes. Being under the influence of alcohol, the part of the brain responsible for coordination becomes less active. Consequently, the brain capability to record the shapes accurately was impaired.

In addition, it was observed that students had a poor balance of a pen while drawing, and deteriorated hand-eye coordination. This experiment indicated that owning to alcohol, an individual is not able to remember vividly what he or she has seen. Alcohol slows down the activity in an area called the hippocampus in the brain. This part of the brain is associated with forming new memories and recalling these memories. During the second experiment when students were drunk, they had difficulties transferring what they saw on a piece of paper. These findings may have particular clinical relevance and implications on public safety. The peak impairment occurred within the first few minutes of consuming a dose of alcohol that put participants at or above the legal BAC limit for driving an automobile in the United States. After administration of alcohol to the students, results indicated that processing of reflexive level was altered by alcohol in terms of ability to draw the pictures, this was apparent in the prolonged time taken to draw a shape.

Objective measures of impairment were obtained through performing the two tasks of drawing the three shapes under sober and drunk circumstances. Students were given a pencil, and a paper to determine their psychomotor task. The aim was to measure their perpetual-motor processing speed. Participants were timed to complete drawing each shape and scores were based on the number of correct shape. A key finding from this experiment was that, in the second experiment where students were drunk, the students made more errors when drawing and they also took more time to complete the task. The findings from the second experiment indicated that an alcohol BAC of 0.08 increased cognitive or motor control. Students who were sober completed the task of drawing the shapes in less time as compared to students who were drunk. The findings in this experiment prove the evidence that alcohol has adverse effects on motor control. The use of both sober and drunk students to show the influence of alcohol on motor control was effecient

There were 23 students who were participating in this experiment. Participants characteristics were compared between drunk and sober groups using student t-test or x^2 tests for categorical for variables. Analyses for the primary dependent variables used row scores at each time point before and after alcohol consumption. Mixed linear models were used to evaluate the main effects of alcohol, time group effects as well as their interactions for performance. In the experiment, drunken students took more time to draw the three shapes compared to students who were sober. Drunken student took double time compared to students who were sober. The table below depicts drawing performance of the student 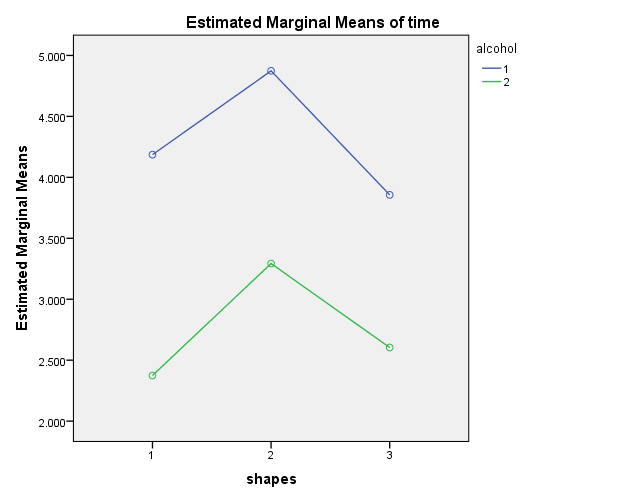