In their article, the authors Narula and Verbeke explain the implications of internalization theory. Regarding its extension, they agree that Rugman integrated and enhanced the analysis at the firm-level through in-depth focus on the concept of specific advantages for the firm. He differentiated these advantages with advantages peculiar to a certain country and created the conceptual foundations of what has currently become the FSA-CSA framework. The authors explained this concept in Figure 1, where the horizontal axis assesses FSAs that are either not relevant/weak or strong and require international expansion. 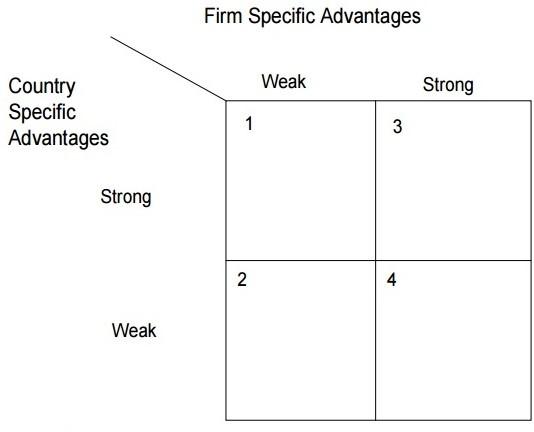 The vertical axis points to country-specific factors, where these CSAs, again not relevant/weak or strong, show the strengths of particular locations corresponding to the other ones. These strengths refer to the availability of conventional production factors or demand conditions and also refer to the knowledge of development processes integrated with specific locations and institutional components that are conducive to the outward international expansion of domestic companies or inward attraction of foreign MNEs. The authors concluded that resulting two-by-two matrix can be applied for classification purposes, for example, positioning conceptual approaches to analyze international business activities.

According to Narula and Verbeke, Alan Rugman’s main understanding in the area of national competitiveness and MNEs was that multinational enterprises could work as diamond connectors. They observed many examples of investment and trade liberalization proposing that double diamond thinking instead of a conventional Porter single diamond model can enhance competitiveness. As stated by these authors, Porter’s single diamond model mainly focuses on what is happening inside a domestic country, as a forerunner of ensuing international competitiveness, because upgrading the firm-specific advantages is a domestic affair. This approach is not appropriate for small economies and for various industries, where international connections are challenging from the beginning.

Furthermore, this article also confirms that FSA development or acquisition and subsequent deployment, upgrading, and exploitation may demand resources that are available only outside of the home country. For instance, in comparison to Porter’s inappropriate view that inward foreign investment is not completely healthy, such FDI should act as a driving force for improving a local economy: The country’s advantages of specific location may exist in the area of attracting inward FDI, instead of supporting outward FDI. Hence, the authors concluded that Porter’s conceptual oversight was that he considered the approach to complementary and localized resources in a domestic country as off-limits to foreign companies, whereas domestic companies would have full benefit and access to the local diamond’s strengths. In actuality, approaching external resources is not restricted to domestic companies that are granted absolute access, when the foreign companies have zero access.

In the second article, Verbeke and Kano discuss the internalization theory context of the regional expansion versus globalization. According to the authors, the internationalization theory is helpful in the contemporary debates regarding globalization. It has been vividly discussed for a long time that the world is reachable, i.e. there exists a commonality across national boundaries and it is so interesting that companies can consider selling the same products in the same way around the world. The evidence of increased homogenization reflects that FDI, international trade, and international telecommunications and transport activities have all increased over time. These authors explained that such increases occur largely with each broad area of the Trinity and that substantial barriers to FDI and trade continue to exist among regions of the triad. Moreover, in this article the scholars have highlighted that 500 largest companies in the world demonstrate average 72 percent of their sales in their home country. Over the period 2000 to 2006, there was no movement towards internationalization, but the largest international companies continued to be highly intra-regional in their assets and sales. Verbeke and Kano support international strategy believing that there are some non-location-bound FSAs that can be easily exploited, deployed, and transferred across the world.

In the third article “Internalization theory, entrepreneurship and international new ventures,” Verbeke, Zargarzadeh, and Osiyevskyy aim to establish strong relationships between internalization theory and the empirical occurrence of new international ventures. Hence, the main attention is on FSAs critique of new venture internationalization. The authors also confirm that international theory can explain the international expansion methods described by both the Uppsala model and INV thinking. This framework is the general theory of the company with solid foundations drawn from three areas: transaction cost economics, entrepreneurship, and resource-based view thinking.

The authors observed that companies often internationalize in a gradual and incremental fashion, instead of abrupt and early investment in the global manufacturing activities. The authors noticed that many companies follow a sequence of planned steps when internationalizing. In this context, companies usually begin with exporting to another economy through an agent, later establish a sales and marketing network, and eventually consider localized production in the host economy. The above-mentioned views do not coincide with the mainstream internalization theory, according to which companies will penetrate into a foreign market and choose an entry mode as a process of FSAs and aspects, for example, the FSAs’ dispersal risk. Undoubtedly, the writers agreed that the Uppsala model is consistent with the internationalization theory, because the mode of international market expansion depends on each firm’s FSAs, including the ability of the company to engage in effective clubbing of its resources with resources available in a host country.

Given INVs’ lack of experience with foreign markets, their internationalization heavily relies on the experience of the founding entrepreneurs. Verbeke, Zargarzadeh, and Osiyevskyy noticed an increased possibility of entering international markets if the new founders possessed higher industry experience. On this basis, the authors formulated their hypotheses. They observed that the industry experience hypothesis did not receive attention in this study as it was restricted to experience in the same industry. This experience can hardly represent a capability to engage in new resource combination, since FSA is required when internationalizing because of resource bundling requirements.

The fourth article “The New Internalization Theory and Multinational Enterprises from Emerging Economies: A Business History Perspective” by Alain Verbeke and Liena Kano focuses on three broad areas of internationalization: where companies from developed economies enter developing countries; where companies from developing nations enter developed economies; and where companies from emerging countries enter other emerging economies. According to the authors, the last two fields of research have generated interest in international economists over the past three decades, as the sudden rise of emerging multinational economies. It has raised the following questions: whether current theories can adjust this class of firms, or a significant remodeling to extant theory, or altogether a new theory, is needed to explain EMNEs. Nowadays, no common consent has been gained. Several scholars have placed their arguments that EMNEs depict a new class of companies, and it is, therefore, inappropriate to examine neither their internationalization activities nor their strategy and organizational structure through the theoretical framework that has been traditionally used in the study of developed-nation MNEs.

The authors uncovered the myths of the Internalization Theory. They emphasized that according to the rationale of this theory, the competitiveness of companies around the globe is dependent on their capacity to successfully recombine their FSAs with location specific advantages of host and home countries. Home-country location advantages and disadvantages will promote or hinder the development of a particular set of distinct FSAs and will impact internationalization patterns and motives. Basically, it is essential to turn to history to observe the effect of long-term differences between internationalization paths to multinational enterprises domestic environment. These authors further extended their arguments that historians of the “global economy” period distinguished among three categories of domestic economies in terms of timing companies’ international business activities such as erratic, persistent, and latecomer. These authors also emphasized that the EMNEs face many historical circumstances, which have influenced their international mechanism and in the same way MNEs are also affected by the developed economies.

The fifth article “The Governance of the Multinational Enterprise: Insights from Internalization” by Buckley and Strange first concerns the internal transaction costs connected with the governance of the activities within the MNE, and emphasizes the costs of information transmission and acquisition, the coordination costs, and the costs of positioning the interests of stakeholders within the multinational enterprises. The second addresses the consequences of different assumptions regarding the risk propensity of the MNE. The authors Buckley and Strange attempted to demonstrate the power of these concepts by examining organizational and technological components as deciding factor of the company with production costs.

The authors’ analysis of horizontal integration predicts production costs and governance costs as both being an “index of know-how” in the company. The governance costs of different modes of doing business in a host country such as FDI vs. licensing are the complex functions of technology. The scientists also assume that the FDI route is invariable to increasing complications of knowledge because of the simplicity with which internal markets can transfer the information. In contrast, the governance costs of licensing increase with the complications of knowledge because of increasing costs involved in the firm-to-firm transfer. A similar assessment is made in the result of the production costs in each entry mode. Governance costs and production costs are then clubbed to give the total costs of conducting business abroad. Furthermore, the article explains that an implicit supposition in internationalization theory is that the MNEs are risk-neutral, and hence, the optimum governance structure that can be decided by referring to the comparative costs of exchanges via the market system and within the governance of the MNE. This may seem oversimplified for many reasons. First, companies do not show any stable risk but exhibit unstable risk-taking behavior. Second, the companies avoid making decisions regarding strategy while managers do. Finally, managers are at less-risk than the company’s shareholders, and thus may not implement the most effective governance structure.

The review of five articles enables to conclude that the internalization theory provides convincing logical evidence for the existence of such multinational enterprises as a governance mechanism, despite the claims of the resource-based theory of the firm. Regardless of its longevity, there is a need to research into the significance and nature of the internal transaction costs and the procedure of strategy formulation by MNEs managers. Advocates of the INV concept demand a new theory to criticize the Uppsala model, since it fails to offer a convincing explanation for early new venture internationalization and because the later model chiefly refers to the globalization of mature companies with a slow process of gaining required experience, which is conductive to expansion in the international markets. A great strength of Alan Rugman’s internalization theory is that it offers optimum conditions for selecting the mode of entry in foreign markets. International expansion via wholly owned subsidiaries happens within MNEs, when the advantages of globalization outweigh both the costs of conducting business in international markets at regional and national levels. The paper also states that internalization theory can be useful for studying the expansion of EMNEs and for understanding the in-depth behavior of MNEs. Whether the relevant companies evolve in developed or emerging economies, the use of internalization theory in studying EMNEs mainly results from lack of understanding of the theory and its epistemological focus.

Haiti’s Natural Disasters and Their Effects
Shall We Dance