The Natural Rate of Unemployment

The government is charged with making policies that will see the countrys economy prosper as well as provide its citizens with conducive environment for doing business and employment. One of the objectives relates to keeping the unemployment rates low enough to achieve full unemployment equilibrium. Thus, full employment refers to a situation where everyone willing to work stands a chance of getting a job. As such, it would mean that the unemployment rate stands at zero for the very simple fact that those not willing to work should not be counted as unemployed (Tucker, 2014). Therefore, to be considered employed, one should be actively looking for a job. However, it should be noted that not everyone in the working age bracket is employed. There are people in this bracket who leave the labor force for unavoidable reasons, such as women on maternity leave. Practically, however, having a 0% unemployment rate in an economy is impossible. This, therefore, makes the task of defining full employment a difficult one. Economists propose that an economy with unemployment rate of 3% or below qualifies as full employment. Nevertheless, this is a figure that the United States of America has not achieved for a very long time. According to estimates from the Federal Reserve Bank of St. Louis, the Natural Rate of the Unemployment rate for the USA for the first quarter of 2015 stands at 5.39%. Currently, the unemployment rate for the United States of America stands at 5.5% (Employment & Unemployment, 2015). Lack of a 0% unemployment rate can be attributed to the existence of frictional unemployment in the economy at any given point (Tucker, 2014). 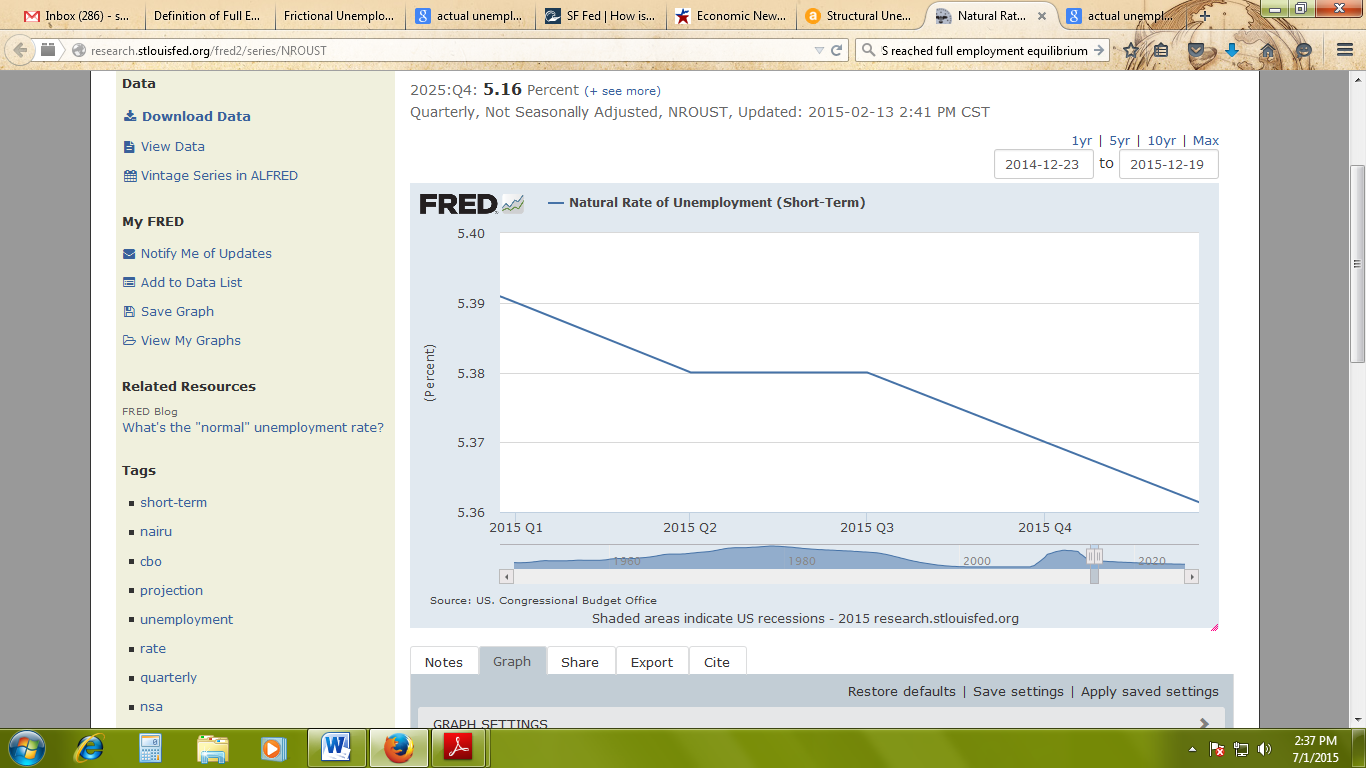 Frictional unemployment can be defined as a situation where people actively look for jobs that they think are best for them. Frictional unemployment is not necessarily a bad thing because it is better for people to take time looking for the best job instead of accepting the first job opportunity that presents itself (Tucker, 2014). Frictional unemployment may also be referred to as search unemployment because people who often seek employment spend some time doing so. For instance, when graduates graduate from college, they enter the labor market but they are not guaranteed immediate employment at jobs that match their skills. Therefore, the period within which the student is unemployed but actively searches for a job is what economists call frictional unemployment. The same will also occur as people go from one job to another for various reasons. Economists call this voluntary unemployment because it is the choice of workers to remain unemployed instead of just taking the first job that comes their way. According to economists, frictional unemployment in the economy is not bad since it would make sense for people to get the right job no matter how much time it takes to achieve it rather than jump for a job that one may be overly skilled for (Tucker, 2014).

During a crisis, equally important was the uncertainty of economic conditions during the recession, and this induced firms to direct their energies to increasing productivity and output without necessarily hiring new employees. Firms have fixed hiring and firing costs that are budgeted for, and if they operate in highly uncertain environments, the option to hire new workers is lowered significantly (Daly et al., 2012). This, in turn, puts negative pressure on job creation. A firm may opt to incur the cost of investing in workers as and when production is needed. However, this option is reduced according to the uncertainty levels. Furthermore, uncertainty prompted selective filling of vacancies by companies that created such vacancies. Therefore, this decreased the number of people hired per vacancy created. With many people were left unemployed in the labor market, the natural rate of unemployment increased significantly during the crisis.